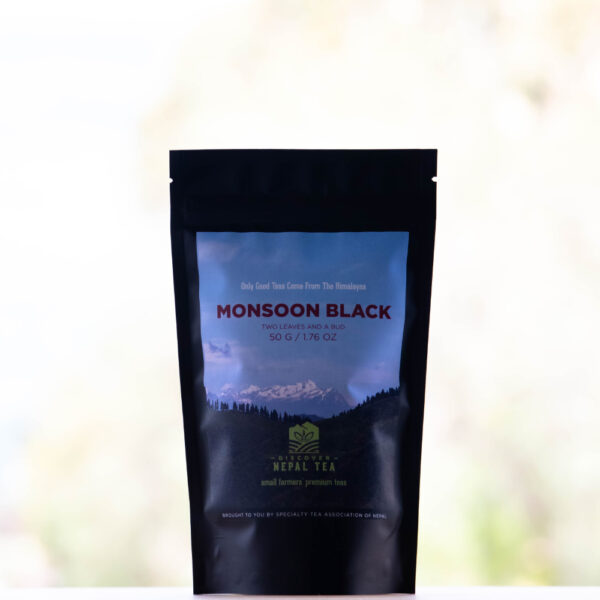 This Monsoon Black is a carefully hand-picked seasonal two leaves and a bud picking of the rainy flush during summer. It generally has a longer shelf life than Spring teas. This tea reveals a smooth to rich complexes with spicy aromas. The body of the liquor is full and fills the palate completely with a sweet and dry finish. The liquor exhibits a bright orange colour with some depth in red hues. This tea reminds of plums, peaches, and wild berries and is hardly astringent.

Largely known as Second Flush this picking begins in early Summer (June) and ends during mid-July. Almost all good cultivars are mixed during the picking, which leads to a complex character of the finished product. During this season the tea bushes lush in a high density. High-grown tea bushes from altitudes that vary from 1200-1800 meters are picked to make Nepali Summer Black tea.

Warm and humid weather conditions, the abundance of oxygen and tranquil air of the Himalayas of Summer contribute to the character of Summer Black. Green shoots are withered for a period of 8 to 10 hours with high volume conditioned air limiting the leaves to dry only to the extent of having enough moisture. The leaves are then rolled for a precise period for deliberate abrasion and shaped according to the type of green shoot. They are dried continuously in high temperatures not exceeding 125˚ Centigrade. Some Summer Black teas reach their prime after 30 full days. Before they are packed and offered, they are re-fired for longer shelf life.

There are no reviews yet.

Be the first to review “MONSOON BLACK” Cancel reply